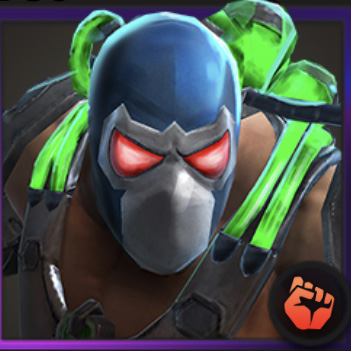 Raised in the harsh confines of Pena Duro Prison, Bane’s enhanced muscles and genius intellect make him a dual threat.

As a child, Bane was forced to serve the life sentence of his revolutionary father in the prison of Pena Duro. Surviving in inhuman conditions, he honed his body and mind to a superlative degree. When used to test the mysterious substance, Venom, Bane’s already formidable physical abilities were enhanced to nearly superhuman levels. Powerful, ruthless and brilliant, Bane is an adversary potent enough to break the likes of Batman himself.

Bane is a Physical Tank Physical character with a base speed of 65. Below is a chart of the gear bonuses at rank 11.

Bane’s clear best ability to upgrade first would be his chance to strike at the end of every turn if overhealed. This includes enemy turns and ally turns alike, even Bane’s own turn. If you’re striking repeatedly, you’ll also want your basic, Venom Punch, to be as potent as possible. The extra critical chance and strength downs make these two legendary upgrades go hand in hand. Next, you’ll want to take the Stun and Critical Immunity. While both of these are nice, they’re mostly just leading up to the second part of that upgrade, which will grant Bane strength ups every time he uses his mending skill.

Bane synergizes well with many heroes. A tank is always a nice thing to have on your team, and with his ability to heal when he takes damage, he provides a sustainable source of tanking, while also dealing fairly decent damage. He pairs well with Starfire in the sense that while he isn’t a dedicated healer, his mending ability still acts as a light heal and can proc her passive. He works well with Lantern heroes that can provide shields where he can safely mend his health back up. Enchantress is also a good teammate for Bane, considering she can rush him to overhealed status quite fast. Check below for a list of recommended heroes:

A heavy counter to Bane is Buff Immunity. While he can give himself a light heal, the main source of healing comes from his ability to stack mends. Heal immunity is also a big problem for him. Characters like Larfleeze who can strip his buffs can shut him down easily.  Stuns also take away his ability to mend and activate his passive, effectively countering him. Be aware of Power Girl, who proves to be big trouble for a physical affinity like Bane.

Bane makes for a wonderful addition to almost any team, taking on the tank role with sustainability even if you don’t have a dedicated healer. He stands alone and can partner well with almost anyone. 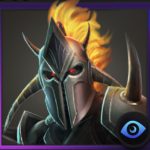 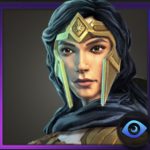