As a former military sniper, John Stewart’s background made him a perfect recruit for the elite Green Lantern Corp Honor Guard.

From the tough streets of Detroit, John Stewart joined the US Marine Corps to become a top sniper before leaving the service and becoming an architect. When the Lantern Corps needed a Reserve Green Lantern for Sector 2814, Stewart was the man to hold the line. Headstrong and uncompromising, Stewart is a master builder whose selfless and dedicated service eventually won a position of the highest honor in the Green Lantern Corps.

John Stewart’s legendary upgrades extend his kit and help him survive long enough to dish out more damage. His 3rd upgrade is his best, not being reliant on his health falling to prove useful.

It’s no surprise that John Stewart works well with other Lanterns and characters that can provide a healthy shield for him to get his work done with. He also can benefit from characters who can provide death immunity, allowing his health to fall to levels where his damage can ramp up without him suffering a lethal blow.

John Stewart finds himself countered by characters who can purge his buffs and stop him from ramping up. Characters that ignore shields can also be a threat.

John Stewart’s newly reworked skills did little to change his kit, leaving him as one of the less viable Lantern members. Until he is on the brink of death, John Stewart is weak, and making it so that he is not killed in one fell swoop by a heavy hitting Mystic can prove more challenging than its worth, making it hard to justify his spot on a team. 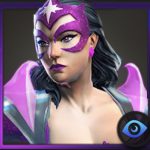