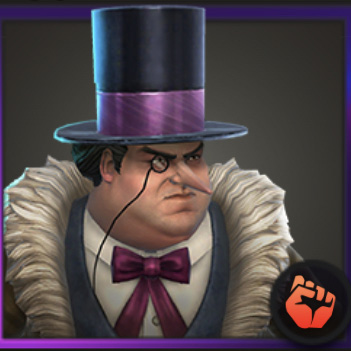 With a cunning intellect and over-sized ego, the Penguin is a criminal mastermind not to be underestimated.

Bullied and harassed as a boy, Oswald Chesterfield Cobblepot turned from his aristocratic background to pursue a life of crime. Establishing himself as a legitimate business man, he runs the Iceberg Lounge in Gotham while maintaining his criminal enterprises. Despite his eccentric appearance and fondness for outlandish weaponry, Cobblepot is a dangerous opponent in Batman’s Rogues Gallery.

Penguin is a Mixed Tank Physical character with a base speed of 71. Below is a chart of the gear bonuses at rank 11.

Penguin is a tank, meaning he can absorb hits. Guaranteeing his Umbrella shield to trigger when critically hit makes him even more tanky, making his 4th upgrade a great one. The ability to steal buffs on his 1st upgrade also makes it a valuable tool in his arsenal.

Penguin loves to absorb critical hits, similar to another great Tank — Superman. He also works well with characters who like shields, like Jessica Cruz and those who can place a taunt on him to try and get his Roost passive to proc more often, such as Poison Ivy.

Characters like Powergirl and Reverse Flash can avoid Penguin’s shields and whittle him down. Avoiding critical attacks can be easier said than done; the more you land on Penguin, the more useless that critical damage becomes! Bleeds can also wear him down as well without triggering his shield passive. 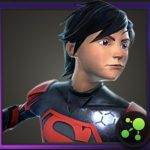 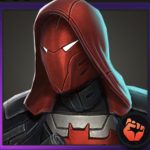