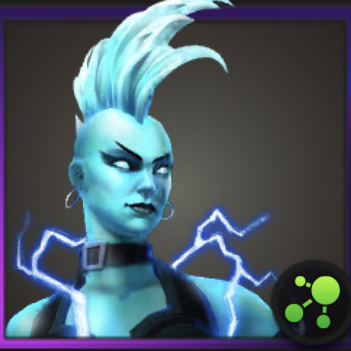 As a radio “shock jock”, Leslie Willis enjoyed nothing better than making Superman the target of her on-air rants. Her disdain for the Man of Steel turned into full-blown hatred after a bizarre accident nearly killed her, causing her to become a being of electrical energy. Blaming Superman for the mishap, she continues to torment the Man of Steel not only with her sharp tongue but also her impressive electrical super-powers.

Livewire is a Special Striker Energy character with a base speed of 99. Below is a chart of the gear bonuses at rank 11.

Livewire becomes an interesting Special Damage based Evade character with some legendary upgrades. This can add some potent damage to an evade team, most of which are strength-based rather than intelligence based.

Livewire can benefit from allies who help her evade as well as allies who can feed her intelligence ups. She naturally partners with Harley Quinn – Mad Jester who can apply AoE intelligence downs and protect Livewire.

Can’t miss attacks can get through Livewire’s evasions, and intelligence downs on her can limit her special damage from getting too out of hand.

Livewire is an interesting addition to the game, being a Special Damage based evasion character. She can work well with other evading characters, but she needs to get as many intelligence ups as possible to deal massive amounts of damage. She can find her spot on many teams, but those looking for an Energy addition to an evade team will find Batman Beyond better fits the bill. 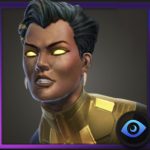 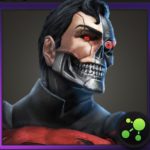